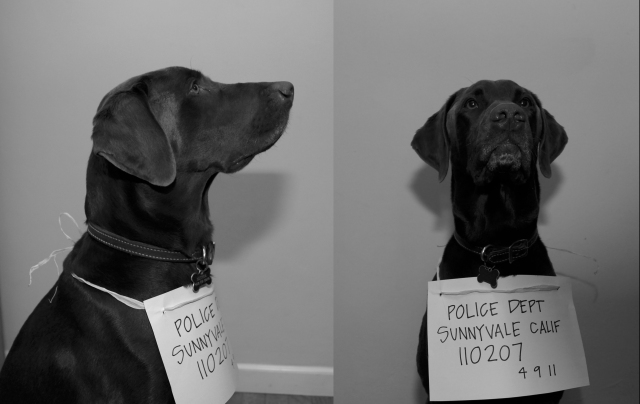 Sutter is trying to keep up with Lindsay Lohan with his shenanigans.

After a lovely evening out with friends, Carl and I got into our car as his cell phone started buzzing. The first words Carl heard were, “This is the Sunnyvale Police.” Carl thought he was being pranked by some friends. Then he heard, “Do you have a dog named Sutter?” Gulp. Uh… ya. Apparently, Sutter busted out of our yard again and was patrolling the streets looking for chocolate when a neighbor spotted him. She put him in her car for safe-keeping and tried calling Carl for two hours. She finally gave up and called the police. Fortunately, the cop thought he’d try calling one more time before booking him and taking him to the pound! Carl told him we’d be home in 10 minutes.

As we drove into our driveway, the cop car pulled up with a happy Sutter sitting in the back seat. I hung my head in shame and hid in the house while Sutter bounded out, tail wagging, without a care in the world. For some reason I don’t think that experience taught Sutter anything… or at least taught him how to be a good doggie. And now the Sunnyvale Police Department knows that our dog does not aspire to be a “canine on duty” but a rebel without a cause.
. 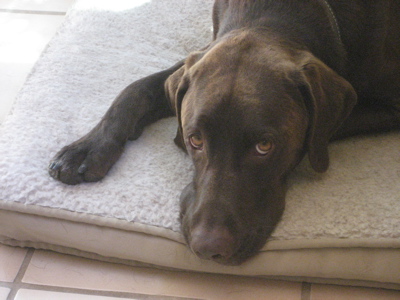 We have not forgotten you. Yes, you now have competition for our attention, but how could we forget you?

How could we forget our first “child” when you:
– throw up on our living room rug
– jump up on our couch (human-only territory)
– hide/eat my slippers (okay, maybe you didn’t do this, but I CANNOT find them anywhere)
– leave a trail of your fur everywhere you go (and even places you don’t go… like how is it that I find your fur in our bath tub?)
– crash Carl’s laptop onto the hard-wood floor to its death
– bark at any living thing that walks by our house during the day, and the wind that blows through the orange tree at night
– sneak into our garage and drink out of the toilet
– counter surf or go on your chocolate finding hunts
– pull emergency vet visits at midnight (12 hours before I went into labor)
– whine for an hour at 3 in the morning (the first night that our babe decided to sleep 9 hours straight)
– smear your nose on our sliding glass window
– perform “security” bag searches upon entrance into our house
– eat and check, check and eat, eat and check, repeat (to make sure we haven’t left you, while dropping crumbs all over the kitchen)
– hiding gems (turds) in the backyard or burning your mark in yellow on our new lawn
– run and do your poopy dance, creating divots in the lawn
– give us your muddy snuggies

We thank you for being our silly doggie, but you don’t need to worry. We have not forgotten you.

Love,
Your tired and weary owners

Sutter has officially made it onto Santa’s naughty list. Apparently we didn’t tell him that you can’t eat Santa.

Here’s what happened. On Sunday before we headed to a party in the city, we put Sutter in his “secure” crate in the kitchen. It’s been raining a lot here, so we figured that’s the place he’d like to be. We were wrong to think he’d be calm and resting in the crate while we were away.

When we came home that night, we walked into what was most likely a chocolate binge party. See’s candy wrappers littered the floor (the entire new box of truffles was completely consumed after tearing through the cellophane), the chocolate cookies on the counter had been demolished, and the 12-inch solid chocolate Santa that was on our table (a gift from Carl’s boss), was nowhere to be found. If there had been a hidden camera in our home to catch the action, we would have seen clips of Sutter jumping on our couch, tossing Santa in the air with his paws, bounding across our bed and even checking out our bathtub. (Perhaps to clean off the evidence?) 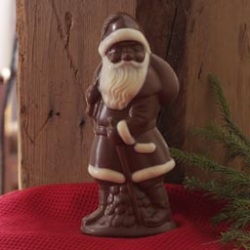 Everyone knows that dogs can’t eat chocolate, right? All in all, we think he consumed more than 32 ounces . Umm… another vet bill? After our calculations, we called the emergency number and a tech gave us the detox solution. Hydrogen peroxide. So for the next two hours, we forced this down his throat to get him to throw it up. We’ll just call that time Sutter’s torture chamber. So far, he’s survived. But now, he’s not only on Santa’s naughty list, but ours as well. Hope he likes coal in his stocking. Oh, he’ll probably just eat that too.

As a side note, we’ve nicknamed our dog with the name “Sutter Butter.” A few weeks after we gave him this name, we discovered that he ate an entire stick of butter which he snagged off our counter. I guess he wanted to live up to his name? Now, being a chocolate lab, we see that he takes things quite literally.

Dog Whisperer… please come down the chimney to help us!

Yes, we did what “those” people do before they have kids. We celebrated Sutter’s birthday – complete with a chocolate cake and singing. He even chimed in with some barks during the “Happy Birthday” song. We’re sure he appreciated it. 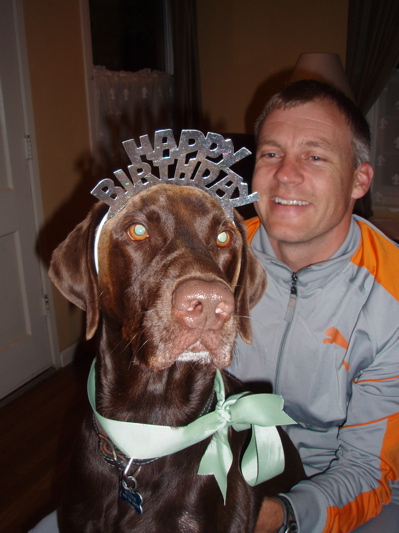 He still acts like a teenager, even though he’s 28 (4 in adult years). Good thing he’s cute!

And, he couldn’t be a dog in my house unless we made sure he had his own set of costumes, right? You can tell by the look on his face, that he really appreciates this. Sorry buddy. 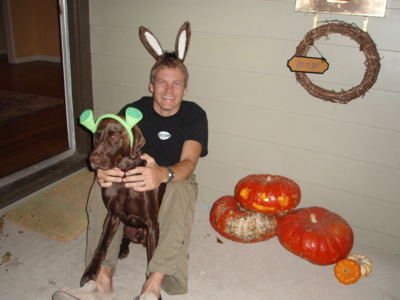 Sutter-Shrek and Donkey on Halloween 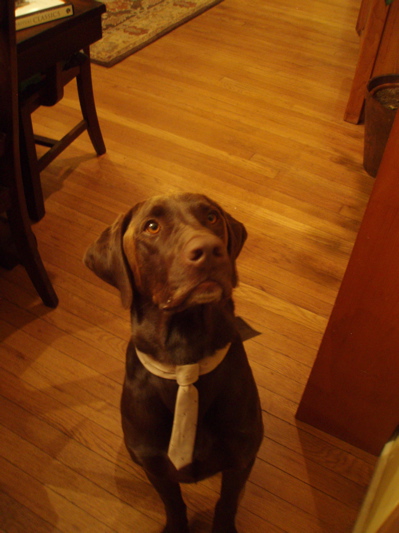 Interviewing for his job as Chief Begging Administrator. You’d hire him, right?

Here are step-by-step instructions on how to walk your dog.
Step 1: put leash on doggie
Step 2: dust off old skateboard
Step 3: look both ways for oncoming traffic
Step 4: yell “giddie-up” to your doggie
Step 5: don’t fall

Notice the green Jetta in the background? Say “bye-bye.” Donating it to science this week!

Yes, folks. We are now the proud owners of a dog named Sutter. I hesitated on posting this blog until I knew Sutter had passed the trial period. After our first week with him, I wasn’t sure if I should submit a script for a movie sequel to Marley and Me. Yes, it was that exciting. To copy the MasterCard commercials, here’s a nice recap of our first week and an alarming introduction to dog-ownership.

Scrambling to get a collar, dog-tag, and crate on the Monday night he was dropped off at our house: $200

Ear-plugs to help us sleep through our first night, while Sutter whined in his crate for 6 hours straight: $2

Repairing our fence after Sutter escaped on his first day at our house while we were at work: $250

Vet bill after Sutter got his toe-nails wripped out while playing on some playground equipment: $500

Owning a dog and adding a new member to our family: priceless. 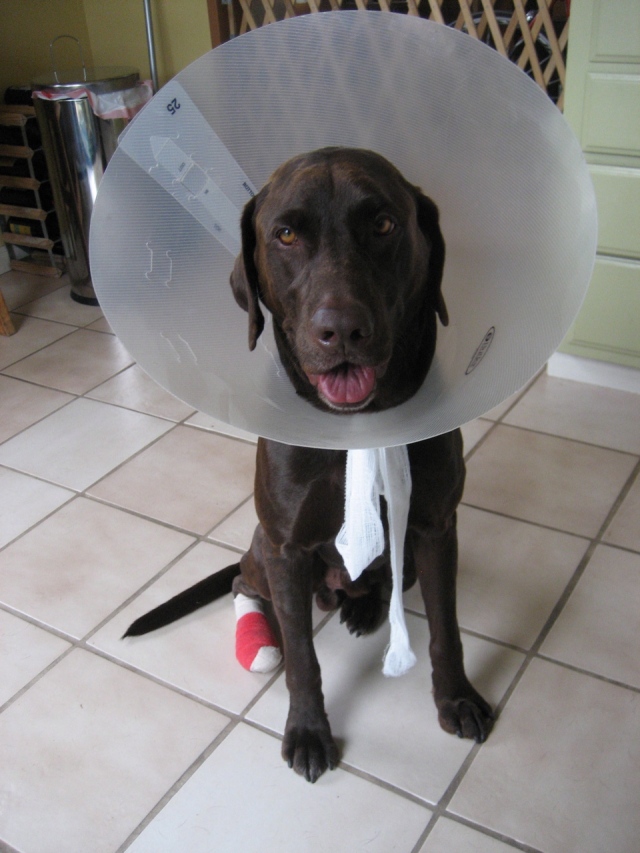 He’s a sweet 3-year-old doggie, loves kids, and adores Carl…his pack leader for sure! (Yes, we are now faithful followers of The Dog Whisperer.) We adopted Sutter from Lab Rescue (we just wish they would have prepped us a bit more…phew!). We named him after Sutter Street (where I lived in San Francisco). The crazy thing is that his original name was Bear, but since that’s Carl’s nickname for me, we thought we’d avoid confusion and change his name.  And frankly, I don’t want to have the same name as the doggie.