For our February “honeymoon” weekend, Carl and I ventured south to the Central Coast. When Carl originally suggested that we go to Cambria, I must admit that I scrunched my nose a bit. I’m sure I was just jealous, but when I was single, I’d get so bored hearing about all my married friends going to Cambria for a romantic weekend away, and I vowed that I wouldn’t do the same. Now I understand. Oh, how I love eating my words. But it was easier to swallow when Carl said that he found a farmhouse B&B that was FIVE MILES away from Cambria. Nice.

I’ll probably say this several times during my “month-moon” posts, but California is a beautiful state. We started our drive down Highway 1 during the same time that the Mavericks surf contest was taking place in Half Moon Bay. I kept urging Carl to “pull over, pull over” so I could watch the huge waves crashing to shore. (Notice the Bixby Bridge in the background.) 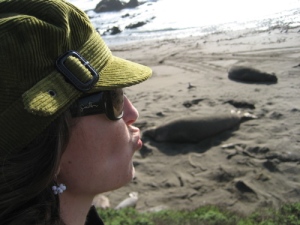 When we got to San Simeon, we had to say “hi” to the elephant seals. And… lucky for us, it was mating season. I won’t go into detail, but it was not rated G.

We stayed at the McCall Farm Bed and Breakfast and were greeted by two dogs and the amazing couple who runs the B&B. They joined us for their daily (and complimentary) wine and cheese hour while giving us tips on the not-so-touristy places to eat in town. The farmhouse is surrounded by a working farm, where the owners grow oranges and avocados. Surrounded by green rolling hills, it was an idyllic spot for a restful get-away weekend. We spent our mornings devouring the gourmet breakfasts and sipping coffee and reading on the front porch.

In the afternoon, we took our bikes to tour the wine country of Paso Robles. And I thought Paso only had a huge McDonalds and Sizzler (from what I could see from the 101 freeway). I let Carl bike back to the B&B, while I drove the truck through this beautiful green landscape. Yep… the bike muscles haven’t quite gotten to the Carl endurance level yet, folks. And I am totally okay with that.

Just to prove we were in Cambria, here you go.  And you know what? I’d go back.

Rating: Two enthusiastic thumbs up. (Not even one scrunchie nose.)

What we’d bring with us next time: Some friends to enjoy the B&B with us!